Our newest application note compares the LOABeads system to instrument operated column chromatography. Monoclonal antibodies were purified in parallel from four 200 ml CHO-cell culture samples using 1 ml LOABeads PrtA30 for each and the LOABeads MagSep separators. At this scale, the four antibody samples were processed faster than an estimated purification of one single sample on a column chromatography instrument.

Lab on a Bead awarded with grant

Exciting news! Lab on a Bead AB has been awarded a grant of 1.7 MSEK for a one year project together with our partner Dr. Véronique Chotteau, Dep. of Industrial Biotechnology, KTH Royal Institute of Technology, in Stockholm. Our project, Novel Technology for Purification of Biopharmaceuticals, aim to show proof-of-concept for Lab on a Bead’s system in pilot scale; a crucial step for being able to move into bioprocess scale.

Out of 49 application, of “…very high quality…”, and peer-reviewed by an international panel, ours was one of 11 projects that were awarded grants from Vinnova in their research program Next-generation Biologics; a program that focus on development and production of biopharmaceuticals. Vinnova is a Swedish government body working to “ensure a well-functioning innovation system in Sweden and to make Sweden attractive for businesses”.

Get to know our distributors!

For your convenience, Lab on a Bead works with a global network of distributors, who will assist you locally with orders and technical support.

This fall we have had the pleasure of adding several new distributors to our network. We now have distributors in North America, China and several European countries. A newly updated list of our distributors is available here.

If Lab on a Bead is not represented by a distributor in your country, we will accept your orders directly and provide technical support.

Check out our distributors!
posted in News
author

Lab on a Bead has compiled an Application Note in cooperation with researchers at the Science for Life Laboratory at KTH, Stockholm, Sweden, where LOABeads MabBind A were used together with a KingFisher™ Flex robot, to purify expressed scFv antibody fragments from 500 ml bacterial cultures.

In this study, four different recombinant scFv proteins were handled in parallel. The scFv-constructs contain an ompA-signal, directing the translated protein to the perisplasmic space, with a fraction leaking out into the cell culture media. LOABeads PrtA30 were efficiently used to purify both the cellular and extracellular fractions of the scFv protein. 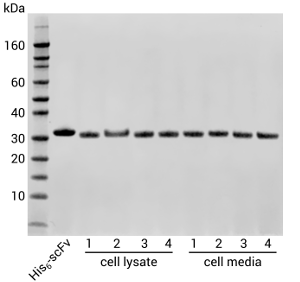 For cellular scFv, the magnetic beads were incubated in 10 ml of completely lysed bacteria. Subsequent washing and elution were performed using the KingFisher Flex robot.

For extracellular scFv, LOABeads PrtA30 adsorbed the expressed protein in the 500 ml harvested cell culture media and initial separation of the protein A beads was handled in a LOABeads MagSep500 magnetic separator. The beads were then resuspended in smaller volumes, with washing and elution performed using both LOABeads MagSep50 and a magnetic rack for microcentrifuge tubes.

Both setups yielded highly pure protein from all clones (picture above). An ELISA test showed that the scFv remained active when neutralized after the low pH elution. 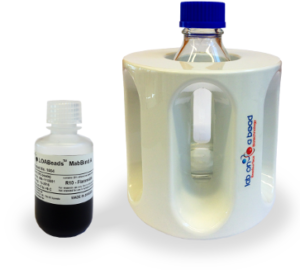