LOABeads™ Protein A – Best on the market

Protein A coupled to beads is the most commonly used tool for many antibody-based applications such as affinity purification, immunoprecipitation and depletion. Protein A coupled magnetic beads are becoming a popular tool for these applications. They provide a rapid and convenient method to perform experiments at a small scale using simple magnetic separation. 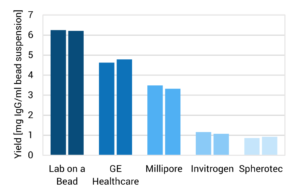 In a recent study by Peró-Gascón et al., LOABeads AffiAmino beads from Lab on a Bead AB (Uppsala, Sweden) gave the best result in a novel setup for analysis of serum transthyretin, a protein involved in familial amyloidotic polyneuropathy type I.

Different types of immunosorbent magnetic beads were tested manually for their capability to precapture serum transthyretin, namely LOABeads Protein A and LOABeads AffiAmino (Lab on a Bead), Dynabeads Protein A (Thermo Fisher), and SiMAG-Protein A (Chemicell). Due to their positive characteristics compared to the other brands, with high binding capacity and favorable size, the magnetic particles from Lab on a Bead were used for continuous experiments in a microcartridge based on-line immunoprecipitation method. In this setup, the transthyretin captured by LOABeads were subsequently automatically separated and analyzed by capillary electrophoresis mass spectrometry.

The LOABeads in the microcartridge showed consistent repeatable results over 20 test runs, as well as lowering the sensitivity 25 times over previous methods. The authors concluded that magnetic beads offer a powerful alternative to expand the possibilities of capillary electrophoresis mass spectrometry as a method in clinical applications.