Magnetic beads coupled with protein A are one of the easiest methods to purify monoclonal and polyclonal antibodies from serum, ascites and hybridoma cell cultures. For small sample volumes this has been the case for a long time. Now, using magnetic agarose beads, such as LOABeads Protein A, it is possible to scale up the sample volumes to 50 ml or even 500 ml. Compared to chromatography, magnetic beads have several advantages. 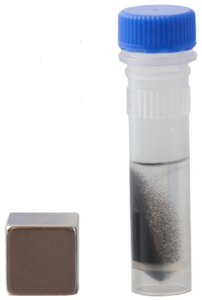 Magnetic agarose beads combine the highly valued properties of agarose with the simplicity and fast separations of magnetic beads. Traditionally magnetic beads have been solid particles with a magnetic core. This gives them a significantly lower surface area than agarose beads, which are porous, and thus also a lower binding capacity. Agarose beads are larger than the solid beads, which makes them easier to handle and lets them contain more magnetic material, allowing faster separations. The latter property is very important for the possibility to scale up experiments with magnetic beads.

Protein A or G beads are in many cases the simplest way to purify antibodies, but for polyclonal antibodies, immuno-affinity purification is often the preferred method. The antigen that the antibodies were raised against is then coupled to activated beads, for example LOABeads AffiAmino. The antibodies will bind to the beads through their affinity for the antigen and they can easily be purified.

How to use magnetic beads